Bournemouth Volunteer Group of the Year

The volunteers of the Bournemouth depot were thrilled to win this award as a recognition of their efforts throughout the year. The entry gave details of the work over just over 50 volunteers who had given over 49,000 hours over the course of the year doing everything from driving, warehouse work, delivering and installing furniture and electrical items, greeting clients and a whole host of back room functions.

Well done everyone – put simply, without you, Dorset Reclaim would not exist!

The win was covered in the newspaper article below

The unsung heroes making a difference in Bournemouth

COMMUNITY champions who work tirelessly for others have been honoured at the Mayor’s Volunteer of the Year Awards.

Cllr Chris Mayne capped off his Mayoral year by handing out accolades to some of the conurbation’s unsung heroes.

The winner of the volunteer of the year award was John Hammerston, who voluntarily runs the Oakmead Boxing Club and has helped young people and adults turn their lives around.

He often works with teenagers who won’t accept support anywhere else and some of the people he helps have gone on to great success, often at national and regional level.

Despite working full-time, he devotes many hours to ensuring the club is well run, has premises and a high profile in competitions, and often subsidises the club from his own pocket.

Highly commended was Maureen Powell, who has volunteered at the Bournemouth Society for the Visually Impaired, now known as the Bournemouth Blind Society, since her visually impaired husband died.

She was nominated by charity chief executive Philip Tarrant, who said Mrs Powell was liked for all the members for her caring attitude and goes well beyond her duty, often keeping in touch with sick members, doing small amounts of shopping for them and visiting for companionship.

He said her dedication and “can do spirit” at 81 years of age inspired other volunteers and members.

There was also a special award for Jess Weir, in recognition of her long-standing commitment to the Dorset Rape Crisis support Centre.

She assists with the Board of Trustees whilst remaining active as a helpline volunteer, taking in additional shifts and helping with training and supporting new volunteers. She also visits schools to raise awareness amongst young people.

The volunteer group of the year was the Dorset Reclaim Volunteers. The charity has very few staff and would not exist without its dedicated volunteers, who help deliver its services across Bournemouth. 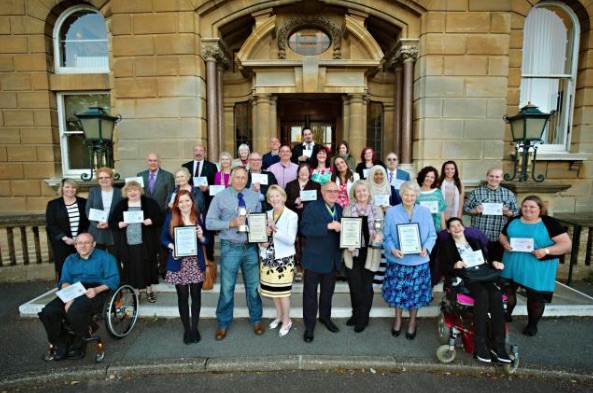 The runner-up was West Howe Community Enterprises, which works prolifically to support efforts to improve West Howe. They were nominated by Martha Searle, who said the volunteers threw themselves into every activity and were “energetic, enthusiastic, inclusive and ready for a new challenge.”