3,000 at Lulworth castle for the Antiques Roadshow

THREE thousand people descended on Lulworth Castle in the hope of finding hidden treasure in their family heirlooms.

The BBC’s Antiques Roadshow drew huge crowds at the castle as experts looked through thousands of pieces sorting out priceless works of art from the worthless family mementos.

Presenter Fiona Bruce said she was delighted to be filming in Dorset. She said: “It is a beautiful part of the world. I have never been to Lulworth Castle before, it’s an amazing venue.” 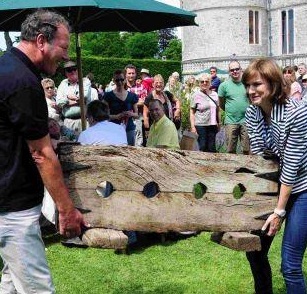 He said: “I’m really pleased, it was a nice day out and I enjoyed myself. It was interesting to see how the programme was made.”

Pensioner Heather Bogan, 79, from Sturminster Newton brought in a clock from World War One that had previously been valued at £1,000 but was given a valuation of £700-800 under the careful eye of the Antiques Roadshow experts. She said: “I’m not disappointed – it was good to get it valued.”

There was even a set of leg stocks that Dorset Reclaim had been given when they were helping a woman to clear out her house.

Project manager for Dorset Reclaim Ray Tovey said: “Sadly we found out they were fake. The wood is 300 years old but the iron work was made at the end of last century.

“They think they were made as a novelty item.”

The Lulworth Castle show will be aired later this year.