Bournemouth charity’s pledge to rise from ashes of warehouse fire

Bournemouth charity’s pledge to rise from ashes of warehouse fire

“LIKE a phoenix, we intend to rise from the ashes.” Those were the words from shocked staff at charity Dorset Reclaim in Bournemouth, after watching their warehouse ablaze in the early hours of yesterday.

Around 200 beds, 40 tables and chairs, 40 sofas, and 800 household appliances like fridges, cookers and washing machines and even a motorbike went up in the fire, along with the offices and workshop.

Roy Pinder, Dorset fire and rescue services group manager, said firefighters tackling the 4am blaze in the two-storey warehouse at Stanley Road were met by a wall of orange flames. “It was hot enough to cause part of the nearby end to collapse, the heat was that intense,” he added. 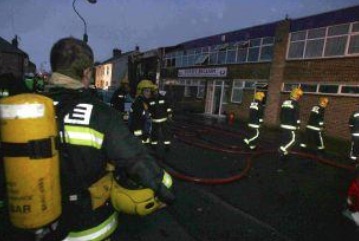 A section of wall on the left of the building also moved, splitting the brickwork and making the building unstable.

Nearly 50 firefighters were at the scene, and some stayed for the rest of the day to damp down hotspots.

Up to 30 people, including a baby, were evacuated at 4.30am to Dorset Police HQ from neighbouring

Holdenhurst Road, along with the occupants of one semi-detached house on Stanley Road. They were allowed to return two hours later. Ray Tovey, project manager of Dorset Reclaim and partner Joanna Taylor, policy and development manager, started getting calls about the fire in the early hours from their volunteers.

The charity, which started in Bournemouth but also has bases in Poole, Christchurch and Dorchester, accepts donated household items and refurbishes them before selling them at low cost to needy families.

Miss Taylor said they would: “Like a phoenix from the ashes, rise again”.

The compamy will operate from its other bases and hopes the building, where it is a tenant, will be rebuilt.

Police are treating the fire as suspicious. Detective Constable Liz Westaway of Bournemouth and Poole CID said: “Fortunately, no-one was injured as a result of this fire, however the outcome could have been so very different.”